Why does something so right feel so wrong? 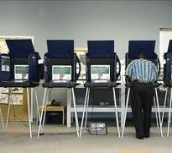 How can something so right (voting) feel so wrong?

It’s easy when it’s your first time to cast a vote in the Republican Party primary when all your life you’ve been a staunch Democrat (or at least a loyal one).

I felt so dirty, so naked and disloyal asking for my ballot and marking the “Republican” check box in front of a Black  men  and women old enough to be my grandparents.   He said nothing to me, though I’m fairly sure that he and they were all Democrats… which is not a difficult guess given the demographics in the room: older, Black.  They’ve probably voted for Democrats longer than I’ve been alive and I’m sure that the election of Barack Obama as president was something none of them imagined possible in their lifetimes.

I felt a bit dirty as I shuffled from one foot to the other; impatiently waiting while the ancient Black woman in front of me was helped to use the voting machine first by a poll worker who was himself in not much better physical condition than she and then (probably illegally) by another voter, also Black but younger.    I stepped up and handed the voting machine operator my card, hoping she would just program the machine and say nothing.

I mumbled something resembling yes in a tone that betrayed my embarrassed desire to not really have to answer that question.

Well she didn’t really have to ask I suppose since it was plainly marked on my voting card, or maybe she did.  I don’t remember ever being asked before if I was a Democrat.  I just think she was surprised or maybe wanted to make sure I hadn’t made a mistake by marking the wrong box on the card.  I could see why

she would be concerned about that;  I’m sure mine was one of the few Republican ballots they’d seen that day and certainly one of the very few cast by a Black man.

I stood shakily in front of the touch screen,  feeling conspicuous and vulnerable as I struggled to pretend not to overhear the conversation between the ancient woman on my left and the younger woman who was helping her understand the voting machine.

“Well these are the choices.  Yes… you push the button next to the one you want.”

“Yes, these are Democrats.  Now this next screen is where you vote for the judges.”

And so it went as I went page by page through the ballot searching for the names of candidates I’d heard of and realizing how many uncontested offices there are with only “Democrat” and “Write-In” listed as options.  Resisting the temptation to write my own name in one of the ballot lines, I skipped over those, voted for an independent candidate instead of the Democrat in one race, hoping that they are independent on the right rather than the left but also figuring that a loony moon-bat but independent leftist is probably better than a Democrat.  I voted to recall two judges, neither of whom I knew anything about, but figured it wouldn’t hurt to throw someone out of office for a change, just like it’s sometimes just a good idea to buy new carpet even if the old one isn’t quite worn out yet.

And then it was done.

I hurriedly left the polling place knowing I’d done my civic duty, but feeling dirty none the less.

How can something so right feel so wrong?

This entry was posted in politics and tagged democrats, disaffected Demorats, election day, escape from liberalism, how can something so right feel so wrong, politics, poll watching, Republican, Republican party, Republican primary, voting. Bookmark the permalink.

8 Responses to Why does something so right feel so wrong?