So much socialism… So little time 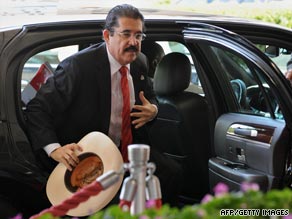 Zelaya arrives to in Washington to confer with the supreme soviet, I mean the Obama administration.

Should I comment on the State Department moving aggressively to cut off aid to the Honduran government for honoring their constitution?

The move to cut $30 million came as Secretary of State Hillary Clinton met for one hour Thursday with ousted Honduran President Jose Manuel Zelaya, who was seized by the military in his pajamas and sent into exile on June 28.

The newly announced cuts are designed to ramp up pressure on Honduras’ interim government to accept the terms of an agreement to end the political turmoil known as the San Jose Accord.

The decision was made “recognizing the need for strong measures in light of the continued resistance to the adoption of the San Jose Accord by the de facto regime and continuing failure to restore democratic, constitutional rule to Honduras,” the State Department said in a statement.

The political crisis stemmed from Zelaya’s plan to hold a referendum that could have changed the constitution and allowed longer term limits. The country’s congress had outlawed the vote and the supreme court had ruled it illegal.

De facto President Roberto Micheletti and his supporters say Zelaya’s removal was a constitutional transfer of power and not a coup.

Closer to home perhaps I should talk about the avowed communist Van Jones who believes that Republicans are “assholes”:

Well maybe not since he just “apologized.”

I know what I’ll do. I’ll let you read what Motivation Truth has to say about Dear Leader’s intention to address the nation’s school children since she’s a teacher and knows better than most the indoctrination that passes for education in our nation’s schools.  She writes:

it makes sense that the President of the United States would speak to kids to impress upon them the value of education. He holds the highest office in the land, and with that comes a level of respect. Simply because of that perhaps some kid will say, “President Obama wants me to succeed, so I’ve got to try really hard.” If that’s what this is really all about, that’s fine. But things are never that simple with this administration.

How very true this is.  But maybe she doesn’t know what she’s talking about.

I’m not somebody on the outside looking in. I’ve been teaching in the same public school in upstate, NY for fourteen years, and the left-wing agenda has never been so obvious to me as it was this past school year. If you think that fair and balanced teaching goes on in all classrooms, think again. I’m not saying that every single teacher is involved in Democrat indoctrination. I’m not even saying most teachers are, but I am saying it happens–too often. You listen to kids long enough, you find out what goes on and you learn the anti-Bush, anti-Palin, anti-conservative sentiments being expressed.

Okay, well maybe she does.  So tell us.  What really is the problem?

Let me run you through a day at school leading up to the inauguration: walk into the building; go to my mailbox; find lesson plans about Obama to use with students that were placed in my box; leave plans in my box (I did not do them!); walk down the hall where there were Obama posters on my left and right–posters about Change, Hope, and all that rhetoric he was talking during the campaign; listen to morning announcements with some quote from Obama right before the Pledge of Allegiance (everyday); go to library and see books about Obama displayed; after school go home and check email; in email find suggestions from ELA professionals about how to incorporate inauguration activities into lessons; read email with information about different seminars and workshops teachers can attend about the inauguration…

When I got an email from the assistant principal detailing the manner in which we would handle watching the inauguration ceremony, I emailed him back with a short note that basically said, “I hope you show the same enthusiasm in four years when Sarah Palin is elected president!” When I saw him later, he admitted that “teachers tend to be Democrats, as am I, but if your girl [Governor Palin] gets in in 2012, I’ll be sure we do the same thing.” My response? “Well, my boy, Bush, got in four years ago, and we didn’t do anything!”

During the campaign, I always informed the students about the upcoming debates, we always discussed them afterwards, and we remained up to date on the campaign. On election day, students checked off where they personally stood on various issues without being told where the candidates stood on those same issues until after the discussion. I prepared a PowerPoint presentation of all four nominees talking about where they stood on each of those issues. Then we had a classroom vote. That’s fair and balanced instruction.

Well maybe not.  So on that note I’ll leave you with one of my favorite cartoons; something that should perhaps be a poster in our nations schools:

2 Responses to So much socialism… So little time