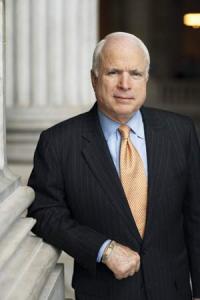 Why oh why can't he be the president?

Stephen Moore of the Wall Street Journal interviewed John McCain.   Reading the interview reminded me of how sad I am that Obama is the current resident of the White House and not the distinguished senator from Arizona.  For all his shortcomings (and they are many) McCain was and is the real article.  Many a conservative purist is likely regretting his decision to abstain from voting for McCain because of his moderate stance and his reputation as a RINO.  Their lack of enthusiasm is what ultimately lost the election.   McCain is a genuine Republican with a defiant independent streak and a visceral disgust for the game of earmarks that have thoroughly infected and corrupted the culture of Washington DC.

“Can you believe they are putting $6 million of pork into Homeland Security?” he asks with his trademark clenched-fists. “They promised they wouldn’t do that. Ben Nelson [the Democratic senator from Nebraska] just inserted a $200,000 museum in Omaha into the legislative branch appropriations bill. These earmarks are a creeping disease. First members condemn them, then they condone, then they embrace them.” Then Mr. McCain adds, “Eight or nine Republican appropriators routinely vote for this pork.” Shaking his head he says, “It’s killing our party.”

His irritation clearly know no party boundaries and like his running mate Palin, McCain is as ready to castigate his fellow Republicans for waste fraud and abuse as he is Democrats.  But he is a conservative and like all true conservatives is not happy about what’s happening in DC under the Obama administration.  And he’s honest; well at least as honest one can expect a politician to be.   Honest about his irritations and honest about what he believes ultimately damaged his campaign.

He believes that he could have won the election had it not been for the market collapse in mid-September. “We were three points up on September 14. The next day the market lost 700 points and $1.2 trillion in wealth vanished, and by the end of the day we were seven points down. We lost the white college graduate voters, who became profoundly disillusioned with Republicans. And by the way, that was the way it ended up. We lost by seven points.”

He certainly was dealt a lousy hand. But I challenge him on whether he might have played that hand better. During the first days of the financial crisis, Mr. McCain looked indecisive and worse, a creature of Washington insider politics. Why did he suspend his campaign, and why did he vote for the $700 billion bank bailout plan, which was wildly unpopular with voters?

Stephen Moore is asking the right questions; the kinds of questions lots of us have been wondering about.  McCain’s answers, though not entirely satisfactory, are solid.  He, like most everyone else, was sold a bill of goods by the kleptocracy of Wall Street financiers under false pretenses.  And he points out, he was not the only one to fly back to DC to deal with the crisis.

“You have no idea the pressure I was under,” he says. “I remember being on the phone with President Bush, Vice President Cheney, the Treasury secretary and [Fed Chairman Ben] Bernanke. They assure me the world financial system is going to collapse if I don’t vote for the bill. So I do the impetuous and rash thing by saying, look, I have got to go back to Washington and see how I can help. And by the way, so did Obama—but it was McCain that was the impetuous one. Obama came back to Washington.” Mr. McCain grumbles, “He was at the White House with me. But he wasn’t impetuous.”

He feels he was misled by the Bush economic team. He wanted the focus of the rescue plan to be on housing and home owners under water—not the lenders or the big banks. “Paulson and Bernanke both told me on the phone, our primary focus is going to be on the housing crisis. That’s our primary focus. And then three days later they switched their whole priorities around.” Instead, the Bush administration got a $700 billion check from Congress to save banks, investment houses and eventually car companies.

Shame on you John.  You should have known better than to trust without verification.  But your error probably didn’t cost you the election.  And neither did the selection of Palin, who electrified the campaign, despite the petty bitter comments from your campaign aides.

“The high point, I think, was the convention, the selection of Sarah Palin, and the enthusiasm that was generated all over the country.” His fondness for Mrs. Palin and her family strikes me as from the heart; he believes she was a net asset for the ticket.

“Let’s face it,” he says, “she galvanized our base in a way that I couldn’t. Everywhere she went she drew enormous and enthusiastic crowds like a rock star.” He says his only regret in selecting the Alaska governor was that no one on the campaign predicted the ferocity of the assaults against her. “To the liberal left, particularly the feminists, she is their worst nightmare.”

And he’s right.  Palin is the nightmare of liberals, leftists, and elitists.  She is what McCain used to be, and in many ways represents the heartbeat of American liberty.   She is self made, both personally and politically.  She is independent.  She has a life outside of politics, and her family is her family, not just a prop for a political career opportunity.  She’s religious and prays for guidance, like most Americans do.  She doesn’t really care about the good opinion of the Washington in-crowd, be they Republican or Democrat, anymore than she cared for the Juneau in-crowd.  And if she ever becomes president, she’ll govern according to the constitution and when she’s finished, she’ll go home to Alaska in time for the salmon run.