Over the weekend dozens, hundreds, thousands, tens of thousands, a whole bunch of bitter, anger, teabagging, racists descended upon the nations capital to protest:

A) The too rapid expansion of government power

C) The rapid escalation of government debts and deficits

D) The corruption, ineffectiveness, and unresponsiveness of Congress or

If you answered “E”  then congratulations, you are qualified to be a newsreader on MSNBC!

If you answered A – D, then you sir are a RACIST!  Yup, there’s no doubt or debate about it.  You are a racist.

In fact, that you’re even reading this blog means that you are automatically racist (unless of course you aren’t White Euro-American. in which case you are a sell-out, self loathing, Uncle Tom… unless you’re Asian or Latino in which case we don’t care what you think because you don’t matter in the racial politics of liberalism, except when we want to make a campaign poster or talk about illegal immigration and how Republicans hate you all… but I digress).

This guy gets it:

Because I was concerned that Barack Obama associated with domestic terrorist Bill Ayers, I am a racist.

Because I think that Joe Wilson‘s “you lie” comment was true, but they way he said it and the venue he said it in was inappropriate, I am a racist.

Because I am worried that the health care plans pushed by President Obama will diminish the quality of medical care for my Caucasian parents and children (and end up raising their taxes too) I am a racist.

Because I think Jimmy Carter is a horse’s ass for defending President Obama by calling his detractors racist, I am a racist.

He goes on and on of course… far longer than he needed to.  But it is good folks are finally coming around to what the idiotic esteemed Jimmy Carter says: 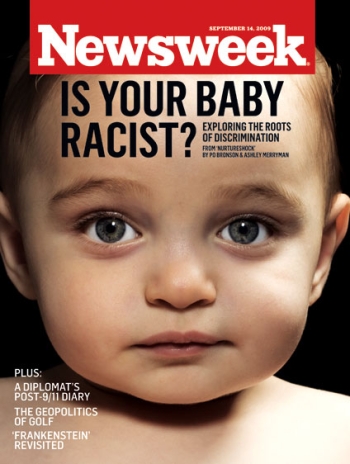 You were born this way

Of course you shouldn’t feel too bad.  According to Newsreek Newsweek, you were born racist

That’s all you need to play the RACE CARD.  You just need someone to say something… and even if they don’t, just make it up.

Surrounded by middle-aged white guys — a sepia snapshot of the days when such pols ran Washington like their own men’s club — Joe Wilson yelled “You lie!” at a president who didn’t.

But, fair or not, what I heard was an unspoken word in the air: You lie, boy!

That’s the wonderful thing about the race card.  You can play it anytime, for any reason.  An all purpose card useful for what ever your needs are.  There is of course the danger that it might be overplayed…

Try it at home!

Lots of people who voted for Obama believed that his election would reflect the extent to which Americans had moved beyond racism. That was part of why some people voted for him. Little did we realize that it would turn every criticism of the President into an occasion to make an accusation of racism. Racism is revolting, but so is the notion that we aren’t allowed to criticize a President!

Jimmy Carter’s supremely sleazy accusation requires a solid, sound rebuke. It is an effort to place the President of the United States beyond criticism.

Imagine if, before last year’s election, someone had argued: If a black man becomes President, anyone who dares to criticize him will be called a racist.

7 Responses to Uh oh! You’ve been played the “Race Card”