Until ….. do we part: the death of Barack & Hillary’s political marriage

Is this marriage destined for failure?

American Thinker has an interesting article posted today that highlights the increasingly obvious fracture between BHO and HRC.  Everyone knows that the unity pony on which Obama rode into the Democratic nomination was bought at the very high price of virtually destroying the fragile nature of the party coalition.  Many of the bitter clingy folks our in fly-over country cast their votes for Obama more out of loyalty to the Democratic Party than for any other reason and many many others refused to even pretend to choke down the koolaide.  In the end, it was the tepid response of many Republicans to McCain’s presidency that won Obama the election rather than any great enthusiasm for Obama on the Democrat side of the ledger.

In the aftermath of the campaign, Clinton stunned many of her supporters by taking a seemingly prominent seat in the administration as Secretary of State, only to be marginalized and sidelined, most recently by Obama’s childish decision to preempt her press conference for one of his own.  Well now it seems that smiling for the cameras and staying together for the sake of the kids is not working out so well. From Hot Air:

Yesterday we noted that Barack Obama had decided to leave his Secretary of State at home while he traveled to Russia to meet with Vladimir Putin and Dmitry Medvedev, perhaps not coincidentally after leaks indicated that Hillary Clinton thought Obama had responded too weakly to the Iranian crisis.  Another Clinton has decided to defy Obama more openly.  Former President Bill Clinton agreed to headline a fundraiser for Carolyn Maloney’s primary challenge to Senator Kirsten Gillibrand — after Obama endorsed her in the special election:

Hillary’s strongest base of support always came from the blue-collar Democrats that Obama famously derided in last year’s campaign.  I was one of those, and I appreciated her tougher line on national defense.  Not to mention that she was flat out more competent and qualified.  From American Thinker, it seems we are not alone in our alienation:

I suspect that something in addition to the disaffection of working class Democrats may also be at work. On one recent trip into the liberal enclave of Asheville, NC I noticed several cars sporting Hillary bumper stickers.  Given the diminished number of Obama stickers, they really stood out. Maybe it was just an anomaly, an improbable conjunction of my route with that of a handful of dead enders from last Spring’s bitterly fought primaries. But I suspect the PUMAs are getting ready to roar once again.

Hmm, PUMA… now where have I heard that term before?  They continue:

I base this on the many women who strongly backed Hillary early in the primary cycle and only switched to Obama when it became apparent that he had won the nomination.  White liberal guilt contributed to their desire to see Obama win the general election, but he clearly hadn’t been their first choice.  Not only has that guilt now been expiated, the Obama administration seems to be playing out an old familiar script in the lives of professional women of a certain age.

Last summer, many professional women in the over 50 age bracket who supported Hillary saw Obama as the hot shot with little more than a flashy resume. He seemed to epitomize the type of outsider executive recruiters would bring in when the boss retired or died, during the era before women were given the opportunity to be top executives. Often everyone at lower levels in an organization knew the retiring male executive’s female assistant had been doing all the work for the last five years, but it didn’t matter.  Only men were ever considered for the high level jobs.

It now has been a year since Hillary was defeated and half a year since her usurper stepped triumphantly into the Oval Office.  While Obama was admired as a great orator, his lack of ability to actually get things done is more apparent by the day.  Even though these women are loyal Democrats, ingrained gender politics makes it hard for them to resist the I told you so attitude.

Well the women I know who identify themselves as PUMA would hardly agree with some of the ways they are characterized here, they certainly agree that Obama is a usurper and isn’t getting much done.

There is added emotional resonance among such women because, like the executive assistant of old who was never considered for her boss’s job, Hillary loyally supported Obama in the general election and agreed to serve in his cabinet.  In their eyes she has been doubly victimized by a condescending whippersnapper who first gave her the finger on the campaign trail only to now fall on his face in the executive suite.

And so it always goes for many women.  It remains to be seen what will happen next, but this marriage of convenience seems to be on the rocks. 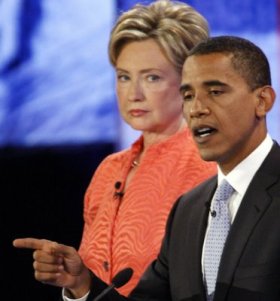