Like most news that should be closer to the front page than the back, the Obama adminstration’s continued press against the constraints of presidential power embedded in the US Constitution doesn’t stop at the water’s edge.  Indeed  the administration installs “czars” who insist on secrecy instead of transparency, as in the case of the Carol “put nothing in writing” Browner, and subtly tries to circumvent the US Senate’s role in confirming treaties, to say nothing (really I mean nothing… I don’t give space here to speculation on this issue) of his purported lack of eligibility under the constitution to even be president.

Now we know that Obama’s fondness for unconstitutionality isn’t simply home grown.  In Latin America, long known for breeding “president’s for life” (and not in the good sense of being “for life”) the Honduran people wised up some years ago and created a consitutional barrier to just such an eventuality.  Dennis Prager tells us:

The president of Honduras, Jose Manuel Zelaya, a protege of Hugo Chavez, decided that he wanted to be able to be president for more than his one term that ends this coming January — perhaps for life. However, because the histories of Honduras and Latin America are replete with authoritarians and dictators, Honduras’s constitution absolutely forbids anyone from governing that country for more than one term.

Instead of following the law, Zelaya decided to pull a Chavez, and sought to amend the constitution. So far, so good. Except that term limits are not subject to amendment under the Honduran constitution.

Zelaya tried to get around the contitution by referendum, which their supreme court rejected (something I’m sure even our court would have the courage to do).  The head of the armed forces obeyed the law, and soon thereafter Zelaya himself attempt a coup.  Now Zelaya finds himself in exile while the government of Honduras goes on as usual.   The Wall Street Journal reports that there is a willingness to negotiate, but:

Roberto Micheletti, the man who replaced him as president, says everything can be discussed except Mr. Zelaya’s return as president

So where is our own president on this issue?  Needless to say, on the wrong side, as usual.  Obama is reported as saying:

“it would be a terrible precedent if we start moving backwards into the era in which we are seeing military coups as a means of political transition rather than democratic elections. The region has made enormous progress over the last 20 years in establishing democratic traditions in Central America and Latin America. We don’t want to go back to a dark past.”

which is all well and good except, as we’ve seen Zelaya is firmly in the wrong on this issue.  Since when has it become the policy of the United States government to side with strongmen, thugs and dictators?  Oh yeah.. I forgot 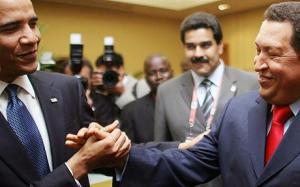 1 Response to Obama rejects constitutional government at home AND abroad!